Of French origin (Bordeaux) as cabernet sauvignon, but results in milder and fruity wines with hints of rasberry. In Bordeaux it is used for coupage and in the Loire Valley to produce red wines with good texture and aroma, as well as longevity (Chinon and Bourgueil).

It could be related to Mencia grapes. Increasingly planted to blend with Cabernet Sauvignon, and occasionally with Merlot. 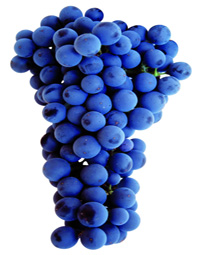 Same origin as the previous grape and the most typical variety from Bordeaux. Ideal for crianza wines, intense aroma and color with vigorous tannins. Young wines taste like black cherries and plums, and the more mature wines add a cedar aroma and mineral notes. If not very mature, it shows greenness, green pepper and a tinge of vegetable aromas. Blackcurrant (Ribes nigrun) almost always appears.

Nowadays it is difficult in Spain to find an area where this variety is not produced.

Of French origin, it has a dark blue color and a very thick skin. It is the most accepted red foreign grape in Spain. Of soft tannins, low acidity and high fruitiness, produces silky and velvety wines. Ages well when supported by more structured varieties. Aromas can change depending on the area and the winemaker.

In Spain it is mostly produced in Somontano and Catalonia.

Also originally from Bordeaux, even though it has little presence in this region. In Bordeaux it is only used in small proportions for coupages (Médoc, Margaux…)

Variety highly appreciated for its color, structure and delicious violet aroma, but difficult to cultivate in some areas due to its late maturation.

However, it is increasingly considered in areas like California or Australia and Chile to blend with Cavernet Sauvignon. 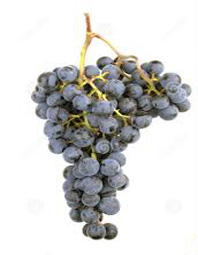 Clasic variety of French Burgundy and the Champagne region. Small fruit of very dark skin coloring. However, the color of the wine is lost more rapidly than in other strains, and becomes orange. In warm climates loses its elegance and complexity. Low acidity (not in the north of Burgundy), and low tannin content.

The models of delicacy combine aromas of strawberry and black cherry, soft but concentrated, with hints of incense and spices. Mature grapes develop leather, wood and game aromas.

Pinot is complex, subtle and profound. It is hard to describe the aroma in the glass because it slides from one to the other.

In Spain it grows mainly in Catalonia. 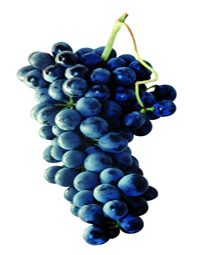 Rhône’s and Australia’s strain par excellence. Nowadays also grown in Spain because it is ideal for warm areas.

Its wines have a characteristic aroma of violet and ripe black fruit (blackberry and redcurrant). With aging, it acquires a strong scent of leather, chocolate and tobacco, with subtle notes of violets. Generally, those in warmer climate are more fruity than flowery.

Syrah in The Rhône, Shyraz in Australia. In Spain, South Africa, Argentina and the United States, both names are used depending on the model that the vine grower wants to adopt: French Hermitages or Australian Grange.

Generally, these wines mature over time although it depends on the production area, from three for Crozes-hermitage to twenty for Australian Grange .

The origin of this strain is uncertain, although it is known that it was closely related to Southern Italy’s Primitivo (also as Zingarello). Grown mainly in Apulia, South of Italy, area of strong wines and high alcohol fermentation.

This variety came from Europe to California in the 1850’s, and it is now the most characteristic strain of the Californian vineyard.

In California, Zinfandel variety, known as “Zin”, is used to produce young wines French Beaujolais style, but it also produces wines for aging, complex and with a strong personality, as well as a pale rosé called “blush”. In general, the variety Zinfandel offers viscous-sweet wines from late harvests. However, the best Zinfandel wines are still the ones produced by carefully pruned old vines with reduced performance. Its cultivation is extended to the Central Valley, Paso Robles region, Amador County and Sonoma area.

This grape variety produces a robust red wine as well as a semi-sweet (rosé) called White Zinfandel. This variety of grape has a high sugar content that allows alcohol levels higher than 15% through fermentation.