According to The International Vine and Wine Organisation, the top 10 wine growers worldwide, and that continue in this rank year after year with little variations, (except for the number one swap of France for Italy and in the final of the ranking swap South Africa for Germany), are: 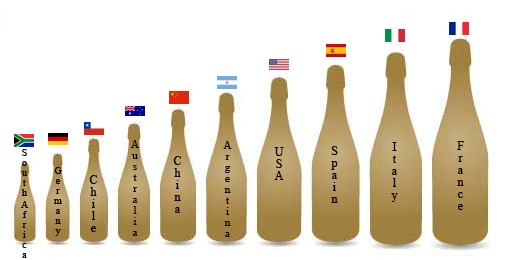 The latest statistics from The International Wine Organisation (2011), show that France is the largest producer of wine, snatching the first place from Italy, with a production of 49.633 millions hl (1 hl = 100 liters).

France is a classic exporter and wine grower, its strains and vinification methods have created a trend worldwide for experts as well as for the general public.

France is so important in viticulture because of the great variety of wines it produces. The diversity of climate and soil allows for light whites to strong reds. Each region in France has its typical wines. There are 11 great distinct wine producing regions: Alsace, Beaujolais, Bordeaux, Burgundy, Champagne, Languedoc-Roussillon, Provence, Corsica, Sud-Ouest, the Loire Valley and the Rhone Valley.

Italy has always been a major force in the wine business, and has occupied many times the top position on the ranking. IOV’s last statistics (refering to 2011) ranks Italy as the second larger producer of wine in the world, with a production of about 41.580 hl.

With good reason, the ancient Greeks called Italy “Enotria” (Land of Wine). Today, Italy still grows vines everywhere in the country, and produces a great variety of wines including dessert and sparkling thanks to the microclimate diversity and suitable locations for growing grapes.

The incredible variety of types produced is one of the characteristics of spanish wines. Practically in no other country (except Italy) we find this great variety of wines, from Cava to Sherry to Albariño, to rosés from Navarra, Malvasías from the Canary Islands, dry reds from Priorat or sweet Monastrell from Jumilla, without forgetting the ones from Ribera del Duero or Rueda. And of course, the most important one, Rioja, the best internationally known spanish wine.

Fortunatelly, the image of Spanish wines has been gradually changing at an international level, and the experts are accepting more and more the idea of wines that have broken the mould thanks to their high quality. Spanish wines are a reference for their unbeatable quality/price value.

It is the highest producing country outside of Europe. The recent history of American viticulture began with small family wineries, often founded by people from other professions unrelated to the wine world. They turned to technology, with complex irrigation systems, aging and bottling, all of it controlled by computers.

Wine is produced in 45 of the 50 states, but most of their wine growers are unevenly distributed through the territory. However, California’s excellent wines are those who have given American viticulture the international recognition.

It is the most important wine producer in South America, ranked fifth in the world, with a production of 15.473 million hl. Traditionally, Argentina has been a wine producing and consuming country.

Argentina’s wine making history dates back to the colonization era, to the mid sixteenth -century. Between 1982 and 1992, there was a significant reduction in the areas devoted to vineyards (about 36% less). As a result, abandoned vineyards were eliminated and/or replanted with low quality varieties, but starting in 1992, some of the erradicated vineyards are replanted with high enological quality varieties.

Nowadays Argentina’s wines are exported to several countries as a result of globalization.

China is also going strong, and statistics of 2011 place it among the top ten larger wine producing countries, ranking sixth.

We may think that China’s wines are of low quality, or that it has no viticulture vocation. Oddly enough, some regions have been cultivating vines for over 4,000 years. However, due to low and extreme temperatures, production was oriented towards high alcohol content liqueurs, and it was only at the end of the nineteenth century that the production of european style wines started.

Australia produces wines of excellent quality/price ratio, consistent with what is sought in the international market. They are fruity and full of flavor, a true reflection of its sunny climate.

The vine arrived in Australia in 1788. Cultivation spread quickly reaching eastern and southern Australia to finally get to Victoria and Tasmania.

Passionate for experimentation, Australians have learned to make great wines from noble European varieties. The greatest recognition is for the work achieved from the syrah (shiraz) –vine variety, from the Rhône region of France. The best Australian shiraz are among the most famous red wines in the world. Chile is one of the few regions in the world with ungrafted vines before phylloxera (64.530 ha). Natural barriers and climate conditions have prevented the development of this desease. Because of its situation (North-South-stripe like) climate and land include both dry and humid and irrigated areas. As a result, their wines have been influenced by great varieties.

The autochthonous wine production is mainly oriented to foreign markets, exporting 50,8% of the wine produced.

The last of the ten largest wine producers. Germany is the fourth most important wine grower in Europe, with a annual production of 9.611 hl (2011), and marks the Northern limit of vine growing in Europe. Cold weather in Northern Europe makes grape maturation difficult, problem that is compensated by searching for sites with the most sunshine exposure. Therefore, the majority of German vineyards are located to the West and South of the country following the river valley meanders, particularly the Rhine and its tributaries.

Germany produces mainly white wines (riesling and Germany gewürztraminer), that retain their freshness and elegance for several years. The best German wines have earned their place in the record book of best wines in the world.

In 1652, Jan Van Riebeeck founded the supply factory for the East India Company, in Cape of Good Hope. Shortly thereafter, he brought vine cuttings, convinced that the wine would reduce the cases of scurvy among sailors.

South African wine growers are closely following international trends, and have implemented most advanced culture and vinification techniques. Many years of research and experimentation have served to establish the best fit between the several microclimates and the specific varieties of the country’s rich vine producing heritage.